This month, I've been doing work to get Quirk running smoothly on phones. The big problem is floating-point textures: Quirk's intermediate state has lots of floating point values stored in textures, but WebGL doesn't guarantee that you can render to, read out, or even create floating point textures.

Actually, according to webglstats.com, the support for rendering to float textures is a lot worse than I thought:

Update: Apparently these support numbers are misleading! Browsers support rendering to float textures without supporting WEBGL_color_buffet_float. I will update with a better graph when I find a proper source for that number.

So apparently it's pretty important to have a workaround for when float texture support isn't present.

The standard workaround for lack of float texture support is to just use byte textures, pack your floats into bytes at the end of every shader, and unpack them at the start of every shader. So that's what I did. And that's how the nightmare started.

(Side note: see this graphics.stackexchange question for the packing/unpacking code, which is still not perfect.)

The correct way to get floats into a shader is uniforms. But the idea I went with was to just directly embed the floats within the generated source of a shader. Like this:

(Note: the WglShader class adds 'highp' declarations to the top of the shader. Floats are 32-bit single precision.)

It's a bit awkward, compared to using uniforms, but not the worst idea. And soon enough the test did stumble over a float that wasn't packed correctly:

So I started fiddling with the encoding code, trying to fix or at least affect the bug, but to no avail. No matter what I did, I couldn't get the right output. Eventually, as I was starting to suspect that maybe gremlins were a real thing, I made a desperate move: special-case the two involved values.

... until I switched the order of the two if statements.

val was comparing as equal to both of the floats I was testing against! This is very strange, because the two values really are distinct floats. A fact you can confirm very easily:

The above function really does return true. Even in GLSL. Even on the machine affected by the bug we've been discussing.

So... clearly something seems to be inconsistent here. We have one value equal to two unequal values. Our next step is clear: turn it into a dead simple test case that can't possibly fail. Here it is:

Basically the above code checks that equality is transitive. It can't possibly fail.

This kind of problem would be typical of floats if we were doing any arithmetic. But we're just comparing against constants!

With that information, I finally figured it out.

My explanation uses two mechanisms to cause all the weird I've been describing:

I think that, when the browser or the drivers or the GPU or whatever on my machine sees the comparison 16211.8955 != 16211.896 it does a special-case constant-folding optimization that correctly replaces the comparison with just false. But, for comparisons that aren't between two constants, the literals survive until a later stage where they are parsed into binary data usable by the GPU. I think this final parsing stage has a precision bug that rounds 16211.8955 into 16211.896 (apparently the constant-folding process uses a different parser).

And that's exactly what happens:

My workaround for this problem is simple: avoid the parser. Pass the floats in as uniforms instead of embedding them directly into the GLSL code.

This parsing precision issue isn't the only cross-machine WebGL oddity I've been running into. There's like three more weird things to figure out before doing the October release of Quirk. For example, the Nexus tablet on my desk is still adding ulps all over the place compared to the HP laptop and the iPhone. More seriously, on both the Nexus tablet and the iPhone, something wacky happens when applying a Hadamard gate to all 16 qubits of a circuit: 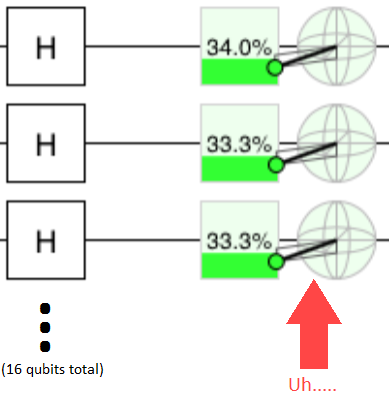 ... Okay... those indicators should never ever be reaching outside of their spheres. And the probabilities should be 50%, not 33%. Moreover, the difference between 50% and 33% is huge and yet appears very suddenly: Hadamard transforming 15 qubits doesn't cause the issue. Given what I know about the structure of the code, that sudden appearance of error just seems impossible. More experimentation is required. No doubt it'll be a head slapper.

Update: Solved it. Apparently some GPUs/drivers/whatever just throw away 13 (!!!) bits of precision on coordinate arithmetic, unless you trick them into not doing it by hiding values behind a uniform... Not so much a head-slapper as an F-bomb dropper. This is not an okay thing to have to workaround.

Hopefully it'll all be done and tested before Halloween, since I'll be travelling to visit the Santa Barbara office and would rather not have it in the back of my mind the whole time.