For whatever reason, people on youtube really like to come up with weird ways to watch The Bee Movie. Case in point: "The Entire Bee Movie but every time it says bee it speeds up by 15%". (If you want a long discussion of this general phenomenon, see PBS Idea Channel's video "The Bee Movie But Every Time They Say Bee We Explain The Deal With Bee Movie".)

In this post, I want to talk about something a bit different: the fact that if you loop The Bee Movie, but keep following the 15%-faster-every-time-they-say-bee rule, you end up causing a singularity where the movie goes through an infinite number of loops in a finite amount of time.

In the actual Bee Movie, the time from "bee" to "bee" varies. Pedagogically speaking, that's an unnecessary complication. To get a handle on how these kinds of systems behave, we'll focus on something simpler first.

Suppose we have a computer program that waits 10 "ticks", then prints the word "bee", then speeds up what a tick is by 15%, then repeats. If a tick is initially one second long, how does this program behave?

The 15% speedups will keep compounding: 6.58 seconds, 5.72 seconds, 4.97 seconds, 4.32 seconds, and on and on. Clearly the program will eventually end up printing "bee" at arbitrarily high rates.

To compute when the n'th "bee" should print, we can solve the power series that describes the accumulating delays:

We can see this very clearly by inverting our time-until-$n$'th-"bee" equation into a which'th-bee-at-time function $F$:

See the problem? As $t$ increases, the natural logarithm's argument is going to go down and down until it crosses 0. This causes a singularity, at $t \approx 76.6$, where the output hits infinity: 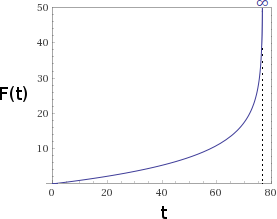 What does all of this mean? It means that our hypothetical program has to print an infinite number of "bee"s in under two minutes. Clearly we're going to need a faster computer!

Anyways, now we understand the general idea of how these make-ourselves-go-faster-including-how-often-we-get-faster systems behave. Let's apply that knowledge to The Bee Movie.

Back to the movie

If we loop The Bee Movie, and make it go 15% faster every time "bee" is spoken, it will transcend our mortal realm and graze the face of infinity. The question is: when? To answer that, we need data.

I went out onto the internet, and found a subtitles file for The Bee Movie. Here's how it starts:

After suppressing the urge to roll my eyes at how wrong that line is, I grepped through the file trying to get a sense of what kinds of "bee" strings show up. Mostly there's lots of "bee" and "bees", a few "honeybee" and "beekeeper"s, and some words like "been" to avoid. All in all, there seems to be 155 instances of a "bee" word:

Because I don't hate myself, I didn't use bash to parse the subtitles file and figure out when each "bee" word happens. I used python for that:

Then used the python code to parse the subtitles file I downloaded:

Google says the length of The Bee Movie is one hour and 35 minutes. Combine that with the times we have in hand, and we can compute how long the first run through of the movie will take:

Just over 5 minutes. To be more precise: 5 minutes, 5 seconds, 633 milliseconds, and change.

There's an infinitely long loop of movie to get through, but we run off the end of the loop... what's going to play after that?

I'm pretty sure that the video I linked isn't compounding the speedups correctly, because I didn't transcend reality and achieve enlightenment while watching the last frame.