This month, a team of scientists published a paper about an experiment related to the quantum zeno effect. There were lots of pop science articles about it and, of course, they caused as much confusion as clarity.

One of the pervasive misconceptions people have about quantum mechanics is that "observation" means "watching", i.e. a conscious human looking in the general direction of an experiment. It's important to clear up this misconception when talking about the quantum zeno effect, because it uses repeated measurements (a.k.a. observations) to control a quantum system.

Journalists worry about their audience taking the wrong message away, so they are careful to clarify this kind of oft-misunderstood detai- Hahaha, of course not. Instead of informing people, let's use analogies that reinforce their existing misconceptions! Turns out "Atoms Won't Move While You Watch" because of the Quantum "Weeping Angel" Effect. And don't forget to quip about watched pots refusing to boil!

I'm exagerating a bit, and not all of the coverage was bad, but for the purpose of feeling clean again let's discuss the quantum zeno effect in more detail.

When a quantum state is measured twice in quick succession in the same basis, it doesn't have much time to change between the two measurements. This prevents it from getting very far from the state it was just measured to be in. So the second measurement has a very high probability of getting the same result again, and thus collapsing the quantum state back onto the same measured state that the first measurement did.

If you do a third measurement very soon after the second measurement, the same thing happens again. The quantum state will be close to where the second measurement collapsed it, you'll get the same result a third time with high probability, and re-collapse the quantum state onto the same original measured state yet again. As long as you measure fast enough and frequently enough, you can keep this same-result-with-high-probability chain going indefinitely.

To understand what's happening in mathematical detail, let's look at what happens when we pass photons through a series of slightly rotated polarizer filters.

By using more and more filters, with finer and finer angular steps from horizontal to vertical, we can let through more and more light. If we have a series of nine polarizers stepping from horizontal to vertical in increments of 10°, then $(\cos^2 10°)^9 \approx 75\%$ of the photons will make it through. If we use ninety polarizers, and 1° steps, the survival rate increases to $(\cos^2 1°)^{90} \approx 97\%$ of the photons.

In general, with $n$ polarizer steps, the probability of an incoming horizontally-polarized photon surviving the whole series of filters (and coming out vertically polarized) is $(\cos^2 \frac{90°}{n})^n$. As $n$ increases, the survival probability converges towards certainty: 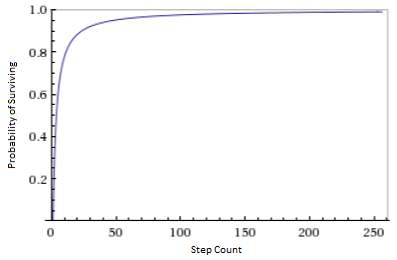 This is really surprising. We're rotating the polarization by filtering it! And we're not losing any photons in the process!

Before I'd read about the zeno effect, I would have never expected this to work. Obviously the filters would have to remove a non-negligible number of photons, otherwise how could they do any steering? Surely there'd be some non-zero proportion of necessary loses here.

Nope. I'd have been dead wrong. The zeno effect is precisely the fact that you can steer states, with negligible loses, by filtering or measuring.

It's common to state the zeno effect in terms of an unchanging measurement stabilizing a time-varying state, instead of vice-versa like in the polarizer example (where a time-varying measurement causes a stable state to change). The example could be made "more typical" by using a polarization rotator material to make the photon's polarization rotate, then using closely spaced horizontal polarizer filters to hold the state stable against the rotation... but I think you get the idea. The underlying math is the same in both cases.

You can hold a time-varying quantum state stable, and even steer it, by frequently measuring it.

The quantum zeno effect is a good counter-example to the idea that measurements unavoidably perturb quantum systems; they unavoidably affect the system, but don't have to perturb it.