The Delayed Choice Quantum Eraser is a widely misunderstood experiment. Apparently the common belief is that it's some kind of grand world-view-shattering mystery, with powers ranging from sending messages backwards in time (example pop-science article) to demonstrating the existence of conscious knowledge (example woo thread). Although there's continuous effort to correct these misconceptions, it's easy to run into them.

Case in point: I googled for "delayed choice quantum eraser" videos. The top result? This youtube video. It mashes a scene from the infamous What the #$*! Do We (K)now!? film into a scene from a terrible episode of "The Universe". Both clips mention backwards-in-time effects, and imply collapse is caused by humans looking in the general direction of an experiment. The forehead-slapping climaxes when a graphic literally shows a person turning waves into particles by opening their eyes (argh!).

Delayed choice erasure (hereafter DCQE) may be counter-intuitive, it may be interesting, but it's not mysterious or magical. We understand the math behind how it works. Interpretations of quantum mechanics explain it without any reference to consciousness or backwards-in-time effects.

In this post, my goal is to add to the pile of "DCQE is not magical" effort in some small way. I'll explain what you'd actually see if you ran a DCQE, show the same effects in a simplified model using qubits instead of photons, and hopefully convince that the common misconceptions are in fact misconceptions.

Your typical DCQE experiment is like a double-split experiment, except that an entangled copy of the which-slit-did-the-photon-go-through information is made. By later measuring the entangled copy of the information along the wrong axis, you can find some hidden interference patterns. The framing is that, by choosing to recover or discard the relevant information, you choose whether there was "really" an interference pattern or not.

The best known DCQE experiment is the one performed by Kim et al in 2000. They stored the which-way information into the position of a second photon (by using a special crystal that splits photons into two photons). Wikipedia has a complicated diagram of the optical circuit they used, but I won't subject you to that. Instead, taking a a few liberties and some inspiration from one of the sites Wikipedia linked to, I made this alternative diagram of Kim et al's setup: 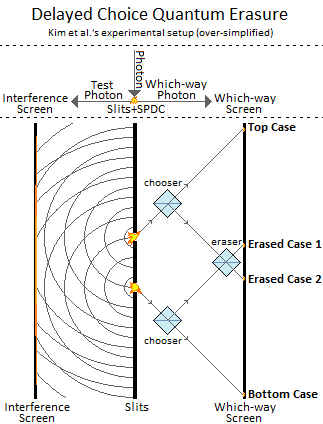 Be aware that the diagram is over-simplified. For example, the actual experiment has various lenses and prisms to direct the photons. Also, Kim et al didn't use screens; they used detectors connected to an electronic counter.

Anyways, let's go over the process the diagram is intended to communicate in a bit more detail:

Here is a diagram (tweaked from one on wikipedia) summarizing what you would see on the interference screen if you ran this experiment, and also the implied pattern within each group (which you can recover only by filtering afterwards):

(Side note: Technically, in Kim et al's setup, finding the "erased" or "revealed" subsets as shown in the diagram's 'What you see' column would also require filtering. That's because Kim et al use beam splitters instead of controllable mirrors to do the choosing. They can't control which choice was made; they have to deduce which choice happened based on where the which-way photon landed. However, because the erased and revealed plots look exactly the same as the total plot, you're not missing out on much.)

That's all I really have to say about the optical experiment. Let's try to simplify things a bit.

Performing DCQE does not inherently require light, and in my opinion thinking about it optically drags many unnecessary details along as baggage. DCQE is fundamentally not about photons, it is about quantum information and the odd things that happen when you try to copy it. As such, we should really be thinking in terms of qubits instead of in terms of photons. So let's translate this optical experiment into a quantum logic circuit operating on qubits.

It so happens that, because entanglement is suspiciously similar to measurement, qubits in an EPR pair appear to be fully decohered. It's only when you later compare results that you see they were coherent as a pair, instead of individually. DCQE is basically nothing but a reframing of this fact.

Concretely speaking, we're going to translate "does the photon make an interference pattern?" into "does measuring the qubit along different axes give probabilities other than 50/50?". We will run the qubit experiment many times, rotate Alice's qubit ($A$) by various amounts around the X axis, and see if the chance of getting ON when measuring $A$ in the computational basis stays at 50% or not. Because $A$ is part of an EPR pair, it will in fact stay at 50% and we will "conclude" that $A$ is decohered.

After "confirming" that $A$ is decohered, we will measure Bob's qubit ($B$, which was entangled with $A$). We'll group our measurements of $A$ into a $B$-was-OFF bucket and a $B$-was-ON bucket, and see if we can find some "hidden coherence". Two cases will be considered: one where Bob measures along an axis perpendicular to the ones Alice is using, and one where Bob just measures in the computational basis.

Here's what happens when Bob just measures in the computational basis:

As you can see above, initially Alice concludes that the input qubits are decohered because the measurement always acts like a 50/50 coin flip even as she tries various rotations around the X axis (i.e. she "doesn't see an interference pattern"). However, because Bob is measuring along a similar axis, and $A$ and $B$ form an EPR pair, his results are correlated with hers (more and less, as their measurement axies go into and out of alignment). So, when Alice groups $A$ based on Bob's results, she doesn't see a 50/50 split anymore. Given this, Alice concludes that her qubit was "secretly coherent" (i.e. she "revealed the hidden interference pattern").

(Side note: technically Alice is only checking axies in the YZ plane, and should also check the X axis before coming to conclusions about coherence. Just assume that she was promised that the input qubits would not be coherent in the X direction.)

Now for the "erased" case, where Bob measures along a perpendicular axis:

Bob's results are no longer correlated with Alice's, so grouping based on them doesn't give any predictive power. Alice concludes that her qubit was "really truly decohered".

You might have noticed I used a lot of "air-quotes" in this section. That's because basically all of the "conclusions" are misleading. They're a result of trying to force "$A$ and $B$ are entangled" into a false dichotomy between "$A$ was secretly coherent" and "$A$ was truly decohered". That's simply the wrong way to think about it. $A$ wasn't coherent, and it also wasn't decohered, it was simply entangled with $B$.

Misconception-causing explanations of DCQE have the exact same problem, they just use a took-one-path vs took-both-paths dichotomy instead of a coherence dichotomoy. If you check closely, you'll often find qualifiers like "IF you think the photon must have either taking one path or taken both paths" before the really crazy stuff. Which is technically correct... but demonstrably misleading. As soon as you drop the false dichotomy, and understand how entanglement is in play, the whole thing becomes kind of boring.

(Another issue in play is that we're not really "erasing" so much as "not revealing". If Bob measures along the wrong axis (or just doesn't measure at all), he doesn't learn information about Alice's result. He could have recovered the information needed to split Alice's results into two interesting cases, but he didn't. It seems really boring when framed that way.)

(A possibly better example of DCQE in terms of qubits comes from the state $\frac{1}{2} (\ket{000} + \ket{011} + \ket{101} + \ket{110})$. The third qubit tells you whether first two qubits are entangled to agree or entangled to disagree. Without conditioning on the correct axis of the third qubit, the first two qubits will fail any test of entanglement you throw at them. Basically, two entangled states can look exactly like an unentangled state... if you don't know which entangled state you're in. But covering this example would lead into discussions of entanglement swapping and why that works and this post is long enough, I think.)

One thing I want to try to communicate eventually, equivalent to what you're saying, is the concept of FOCUS ON THE COPIES. As long as an entangled copy of the information exists, no matter how obfuscated, there will be no self-interfering. Bringing back the self-interference requires un-making any copies. Un-making a copy is generally done by flawlessly running a copy-making process in reverse. Post-selection obscures the symmetry between making and un-making copies. Measurement is just thermodynamically-irreversible copy-making.
Alex Torres - Sep 25, 2016
Kim's version of DCQE has a very simple set up, it was designed to rule out completely any sort of physical decoherence/interaction with the only variable left being the availability or not of information.....there's no mathematical equation to explain that... .of course this is not a physical one since it belongs to the cognitive realm...that's the spookiness on this....besides that, nonlocality can very well explain the apparent retro causality...
Alex Torres - Sep 26, 2016
The video you are referring to is a layman's compilation of various top yt videos...so may I suggest a more explicit in terms of graphical cold explanation....then you might have a better grasp of why this experiment is so mind boggling....
https://m.youtube.com/watch?v=u9bXolOFAB8
Peter Sage - Oct 7, 2017
I would really appreciate your comments on Tom Campbells views as I feel your assertion that consciousness plays no role is pre-dated and still traps us into a pseudo materialists view. This is not a criticism, just a seeker searching for various and contrasting viewpoints so he can make his own mind up. Great work on the article in general. https://www.youtube.com/watch?v=t_RwcGzGurc
Craig Gidney - Nov 21, 2017
@Peter Sage: My view of Tom Campbell is... not very positive. I think his proposed experiments are trivial and his predicted outcomes are incorrect.