This post is the third, and final, part of a worked solution to the following exercise:

In part 1, Constructing Large Controlled Nots, I solved the classical version of the exercise (where an ancilla bit is required).

In part 2, Constructing Large Increment Gates, I did the same thing (one ancilla bit, only classical gates) but for increment operations.

In this part, we're going to use quantum gates (and the constructions from the previous two parts) to avoid that pesky ancilla bit. The basic progression will be as follows:

(Side note: It's a bit disconcerting to spill nine thousand words on such a short exercise, but I suppose that's the nature of having to explain one level back and noting nearby things instead of just showing the end result.)

Classically, not all operations have square roots. For example, the NOT gate has no classical square root. There's simply no boolean-to-boolean function $f$ such that $f(f(x)) = \overline{x}$. But, quantumly, the NOT gate does have a square root.

Then compute the eigenvalues and unit eigenvectors of that matrix:

Which gives us the eigendecomposition of the NOT gate's operation:

The eigendecomposition form of a matrix is very useful because most functions, when applied to a matrix, correspond to simply transforming the eigenvalues. To find the square root of the matrix, we simply replace the eigenvalue coefficients with their square roots:

And, by arbitrarily picking principal square roots, we find one of the square roots of NOT:

If you have some operation $U$ with multiple controls, and access to a gate that is the square root of $U$ as well as a gate that is the inverse of that square root, then you can rewrite the circuit to use fewer controls per operation. The construction for doing so is detailed on page 182 of Nielsen and Chuang's textbook. Here it is (note that the top "wire" is actually a bundle of $n$ wires):

Let's convince ourselves, by case analysis, that the above control-reducing construction works. We want there to be no effect if any of the control wires is OFF, but if all of the control wires are ON then the overall effect should be a $U$ applied to the target wire. There are four cases to consider:

By case analysis, we see that the control-reducing construction does in fact apply a $U$ if and only if all the controls are ON (and nothing happens otherwise).

By nesting the control-reducing construction inside of itself, again and again, we can remove many controls instead of just one:

Unfortunately, this stops working for the last control. The construction will still be correct when there's one control, in that the resulting circuit will be equivalent to the input circuit, but we won't end up with a circuit using no controls:

This is a problem, because the surviving controls are on gates that aren't NOT gates, and according to the rules of the exercise we aren't allowed to do that.

We will definitely need to apply the control-reducing construction once, because we need an uninvolved bit in order to apply the constructions from last time and the time before. However, after that single application, we should switch to a construction that moves controls off of special gates and onto NOT gates.

Moving Controls to NOT Gates

When the control wire in the above circuit is OFF, the overall effect on the bottom wire is $A \cdot B \cdot C$. The controlled-NOTs don't fire because their controls are not satisfied, and the phase shift gate (the $Z(\theta)$ gate) doesn't fire because phase shifts only apply to the ON state. We required $A \cdot B \cdot C$ to be equal to the identity matrix, so nothing happened as required. If the control wire was ON, then the overall effect would be $e^{i\theta} A \cdot X \cdot B \cdot X \cdot C = U$, again as required.

It's easiest to apply the Hadamard bracketing one time at the very top level before we've even applied the control-reducing construction, instead of doing it as part of each transformation we make to the circuit.

The control-moving constructions from the previous part have a problem: the top wire ends up with an operation, instead of just controls. When there are multiple control wires present, that new operation on the top wire (which is not a NOT) becomes a controlled operation:

Fortunately, because the new controlled operation has one fewer control than the original controlled operation, fixing the problem is just a matter of repeating the procedure again and again. Eventually the resulting phase correction will have no controls. Here is what the repeated application looks like:

And here are the start and end states without animation in between:

So far, we've managed to reduce the maximum number of controls, and to move all of the controls to NOT gates. But we still need to clean up a bit.

The construction so far creates a linear number of NOT gates. However, because those NOT gates have many controls, individually breaking them down into Toffoli gates would create a quadratic number of gates overall. Instead, we will re-arrange the NOT gates so that we can simplify the circuit.

This freedom of movement is all we need to re-arrange our controlled-NOTs into an increment gate and a decrement gate:

The final state ends up being surprisingly simple... but why does it work? Let's try to understand how controls can be replaced by incrementing. 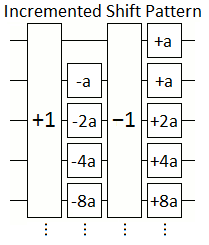 (Note that the "+1" and "-1" gates are working on the 2's complement value stored in the wires, not the global counter. Sorry if that's confusing.)

So, by setting $a$ to $\frac{1}{2^n}$'th of the phase shift we want, the incremented phase shift circuit will add that phase shift into the global counter if and only if all of the wires are ON. Exactly what we wanted.

Putting it All Together

Our construction so far is as follows:

Here are the starting and ending states, for 6 wires. Notice that all of the operations on the right hand side leave at least one wire unaffected, so that the classical constructions from the previous parts will be applicable:

That's it. Reduce the large controlled-nots and increments into a linear number of Toffoli-or-smaller gates by using the constructions from the last two posts, and we're done. I would show the resulting circuit in a diagram, if it weren't for the fact that the construction uses something like $\approx 100 n$ gates. Clearly, in practice, it's more efficient to just have $n$ zeroed ancilla bits available for use (because then you'd only need $\approx 2n$ gates).

That being said... isn't it bad that our solution needs smaller and smaller gates as $n$ increases?

Needing smaller and smaller gates is bad because, in practice, you only have a finite gate set and a finite amount of precision. For example, the most common quantum error correction scheme stops at the $\sqrt[4]{Z}$ gate.

Is there any way to avoid needing more and more precise gates? Well, there are a few possible workarounds:

Unfortunately, none of the above workarounds apply to the exercise we're solving, and I suspect that there's simply no way to avoid the exponentially precise gates without cheating.

The reason I suspect that the exponentially precise gates are necessary has to do with thinking of phases as counters.

Suppose that we are given a very precise phase shift gate: $\sqrt[2^p]{Z}$ for some large $p$. Applying $\sqrt[2^p]{Z}$ a total of $2^{p+1}$ times will rotate any affected phases by a full turn, back to where they started. In effect, this means we can treat each state as having a counter that wraps around after being incremented $2^{p+1}$ times.

Applying the desired operation, a controlled-Z that depends on every wire, only affects the all-ON state. However, the counter is incremented $2^p$ times (adding $2^p$ increments into the counter system), instead of once, because that's how many increments it takes to go half-way around.

Unless $2^p$ is a multiple of $lcm(2^{n-1}, 2^{p+1})$, it is impossible for us to add exactly $2^p$ increments into the counter system by applying our available operation (even if we're allowed to repeatedly permute the states and apply the operation). Unless $min(p+1, n - 1) \leq p$, we're screwed. As soon as $n$ exceeds $p+1$, we won't be able to simulate a fully-controlled-Z operation anymore for the same reason that you can't reach an odd total by adding up only even numbers.

This is not proof positive that we need exponentially precise gates to solve the exercise. In particular, there may be some clever way of partially rotating around the X or Y axies in addition to the partial rotations around the Z axis. However, I would find that pleasantly surprising because it seems to be hard to get back to a nice fraction of a turn after combining rotations around two axies (not counting 90 degree rotations or undoing each rotation in reverse order, of course).

Feel free to surprise me.

Unlike classical computers, quantum computers don't need an ancilla bit to perform a controlled-NOT that depends on every wire. They have the option of using exponentially precise phase shift gates instead.

In either case a linear number of Toffoli-or-smaller gates is needed but, pragmatically speaking, it's simpler and more efficient to just have an ancilla bit available.